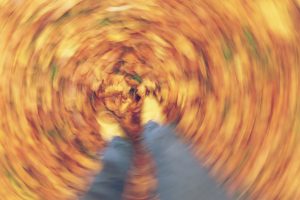 “If I wanted to be this dizzy, I’d go to an amusement park!” To people who have never suffered from vertigo, it doesn’t seem like such a big deal. If they could think how their lives would change with their environment continuously whirling about them sickeningly, they would very likely change their opinion. Vertigo is not necessarily painful but it can be debilitating and continuously disorienting. Driving may be impossible and walking across a room may have dangerous consequence, too. Often, people with vertigo need help just getting by. Do you think you have Vertigo Tallahassee?  Chiropractors have long suspected the relationship between upper neck spinal bone misalignments and vertigo. (Chiropractors may begin their work with vertigo sufferers by ruling out caffeine and aspirin sensitivity, and alcohol involvement.) A recent study published in the Journal of Manipulative and Physiological Therapeutics in February 2000,entitled, A combined approach for the treatment of cervical vertigo seems to support chiropractic’s opinion that vertigo can be helped by chiropractic care. This study, done by several medical and chiropractic doctors, involved 15 subjects with cervical (neck) vertigo who visited their Ear-Nose and Throat doctor suffering from dizziness. The patients agreed to participate in a treatment system which included chiropractic care and a variety of physio-therapies, biofeedback, and exercise. The objective of the study was to see the results of a treatment system using specific conservative methods. Interestingly, 93% of the participants also complained of musculoskeletal problems, mainly neck pain, shoulder girdle pain, and tension-type headache. The patients had suffered these problems on average for over seven years. The median time length of dizziness before treatment began was 52 days. The treatment system, including chiropractic care, lasted on average 41 days and included 5 sessions. It wasn’t a long time but it showed great results. After treatment, 60% reported no vertigo and 20% reported consistent improvement of vertigo. Additionally, the musculoskeletal problems completely cleared up in almost 27% of the participants and improved in 60%! The researchers concluded that the musculoskeletal problems, something chiropractors handle every day, are “important causal and perpetuating factors of cervical vertigo”. This means what caused the neck pain, shoulder pain, and tension-type headaches caused and made worse, the vertigo. Consistent improvement was seen using a conservative multiple system of chiropractic care and other therapies. If you think you have vertigo Tallahassee based Fiorini Chiropractic can help!